The One About my Dog and Husband 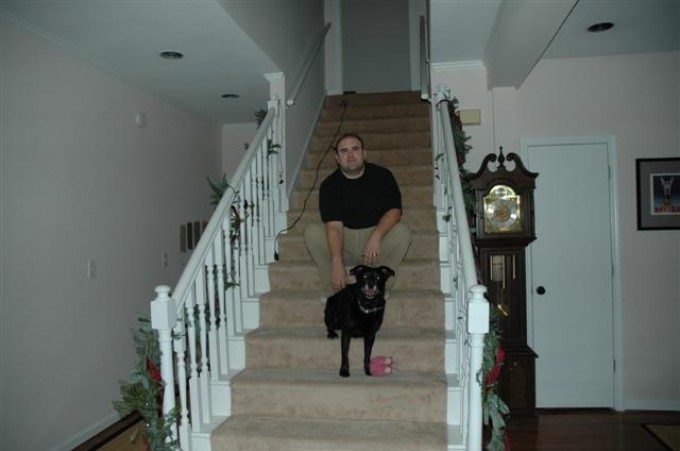 Of all the things people told me to worry about when I married Boy Genius, my dog, Turbo, was not among them. In my defense, I was preoccupied with other stuff. Stuff like the wedding I didn’t want, the foreclosed home we just bought, and the fact that BG’s grandma fingered my wedding dress announcing to everyone how white was not my “friend.”

But I’m getting off point here because I still feel kind of guilty about not considering the Turbo situation. I’m sure other people, better people, would have expected a period of adjustment between my new husband and my spastic dog. There could have been a plan or, at minimum, an acknowledgment that my little dog has a little rage issue. But, in all honesty, I thought she’d go along with it.

Turbo looked at him like “you must be high” and stretched out so the bed was fully occupied.

This is no small feat for a fifty-pound dog and there was a moment of pregnant silence. Boy Genius told her to move over. Turbo growled. He told her to get down. She growled again. I laughed. They both got mad. Boy Genius announced Turbo would sleep on her dog bed from now on. Turbo declared war.

In Turbo’s defense, she was a very good dog. She did get out.

She got out so she could go eat his sneakers.

Four years later, Turbo sleeps with us—right in between us actually. She curls her back into my back and, occasionally, jams one paw into Boy Genius’s unsuspecting self. She’s fond of punching him in the face, but also kicks him in the gut from time to time just to keep things fresh.

Funny how something I never worried about ended up becoming so huge.

Because another thing I never worried about was Boy Genius. He’s wonderful. I really lucked out. He’s such a sunny guy. It’s probably why we work, probably why my twitching subconscious saw him and lingered. He bleaches away my dark.

Except lately he’s the one who’s gone dark. He’s miserable and I don’t know what to do. I can’t fix his job. I can’t fix things with his family. I just…can’t.

It’s the most miserable, defeating word.

The past few days, Boy Genius has just been coming home and going straight to bed. I’ve taken to watching him sleep, which makes me as creepy as Edward Cullen, but without the benefit of a sparkly complexion.

I sit in our bedroom and watch him sleep with Turbo pressed up against his chest. I sit and I worry. Always the worry. It’s just another way of saying fear. I’m afraid. It wasn’t until I married him that I realized fear is more than just my backbone. It’s also my blood and breath.

Because if he can’t make it, how can I?

Is this the “worse” part or “for better or for worse?” And what does that mean anyway? What’s “worse?” It makes it sound like there’s a line. I kind of like that idea. I keep telling myself  there has to be a line—not so I’ll know when to quit, but so I can reassure myself we haven’t reached it yet. We’re still on the side of do-able. We can still make this work.

Sounds like a mantra, doesn’t it? This is probably another thing to worry about. Mantras sound suspiciously hippie-like. I hate hippies. So I’ll add that to the worry litter too.

They’re not as cute as puppies, but they crawl all over each other the same way and they don’t stay in their basket. They trail my heels and slaver.

But back to Boy Genius. Thursday night, he rolls over and stares at me. For a while, we don’t say a thing.

“Why are you worrying?” he finally asks.

“You are. You’re vibrating.” He leans back and pats the bedspread, inviting me in. Turbo wags her tail and whines. She thinks it’s a great idea. She might even agree that, at the moment, Boy Genius really is a genius. I pluck at the hem of my jeans, hesitating like I have to think it over, but I never have to. There is never any question.

I crawl into bed with him so, later, I can get us both back out. I guess it’s not the worst way to do things. It might even be the closest thing to grace we get around here.